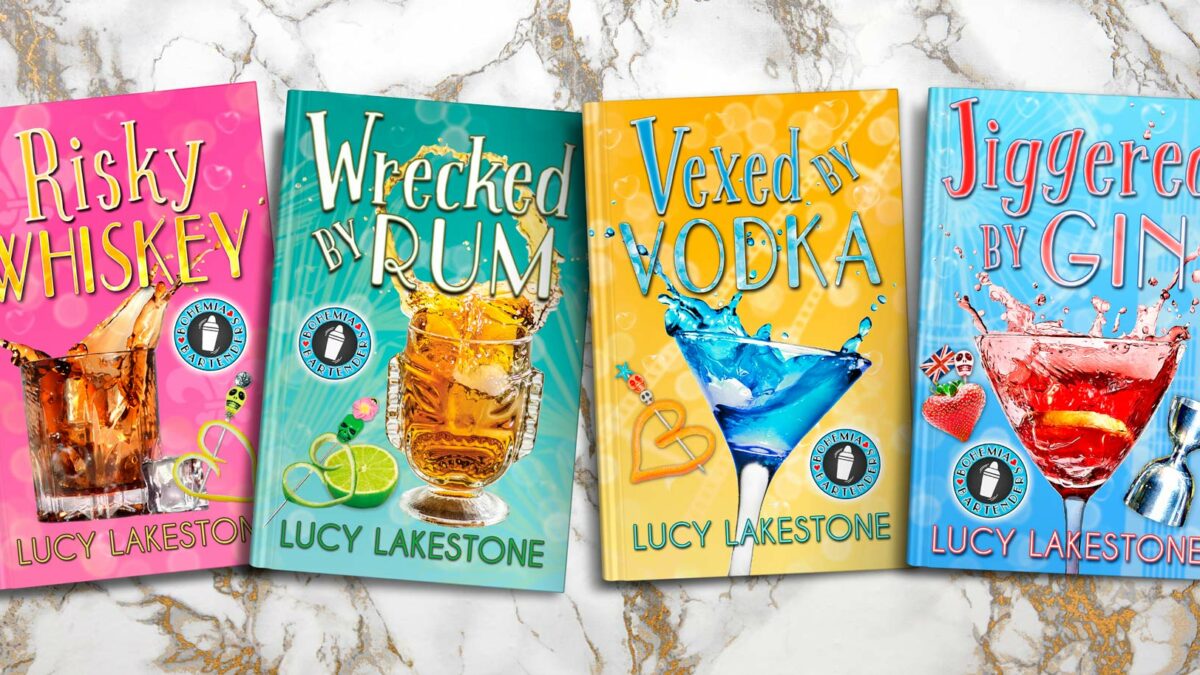 It’s been a long time coming, but Jiggered by Gin, the fourth Bohemia Bartenders mystery, is finally here! I loved immersing myself in London and literary history as I wrote this, plus I love hanging out with the bartenders. This was the escape I needed. I hope you’ll find it a funny escape, too.

Meanwhile, there’s a Goodreads giveaway for Risky Whiskey, the first book in the series. A hundred copies of the ebook are up for grabs – enter now!

A royal pain in the palace …

Mixologist Pepper Revelle and the Bohemia Bartenders land in London for a UK adventure—a gin festival sponsored by dashing distiller Mark Fairman, who wants them to do more than make cocktails. As valuable books mysteriously vanish from his mansion’s luxe library, Mark asks Pepper and her colleague Neil to track down the thief.

But there’s another olive in this martini of mischief. At their frenemy Alastair’s bar, a storied gin palace from Dickens’s time, bizarre break-ins add another mystery to the mix. Pepper and Neil’s sleuthing takes them on a wild ride from the city’s swank watering holes to a fascinating real-life palace as they face deception, devilry and danger.

While Pepper’s tempted by Mark’s extravagant flirting and charmed by his loaner dog, she wonders if hot nerd Neil will stop playing hard to get. But thoughts of love in London seem trivial when murder is poured into the punch. Can they solve multiple mysteries before they’re juiced like a lime in a gin and tonic?

Jiggered by Gin is the fourth book in the Bohemia Bartenders Mysteries, funny whodunits with a dash of romance set in a convivial collective of cocktail lovers, eccentrics and mixologists. These quasi-cozy culinary comedies contain a hint of heat, a splash of cursing and shots of laughter, served over hand-carved ice.