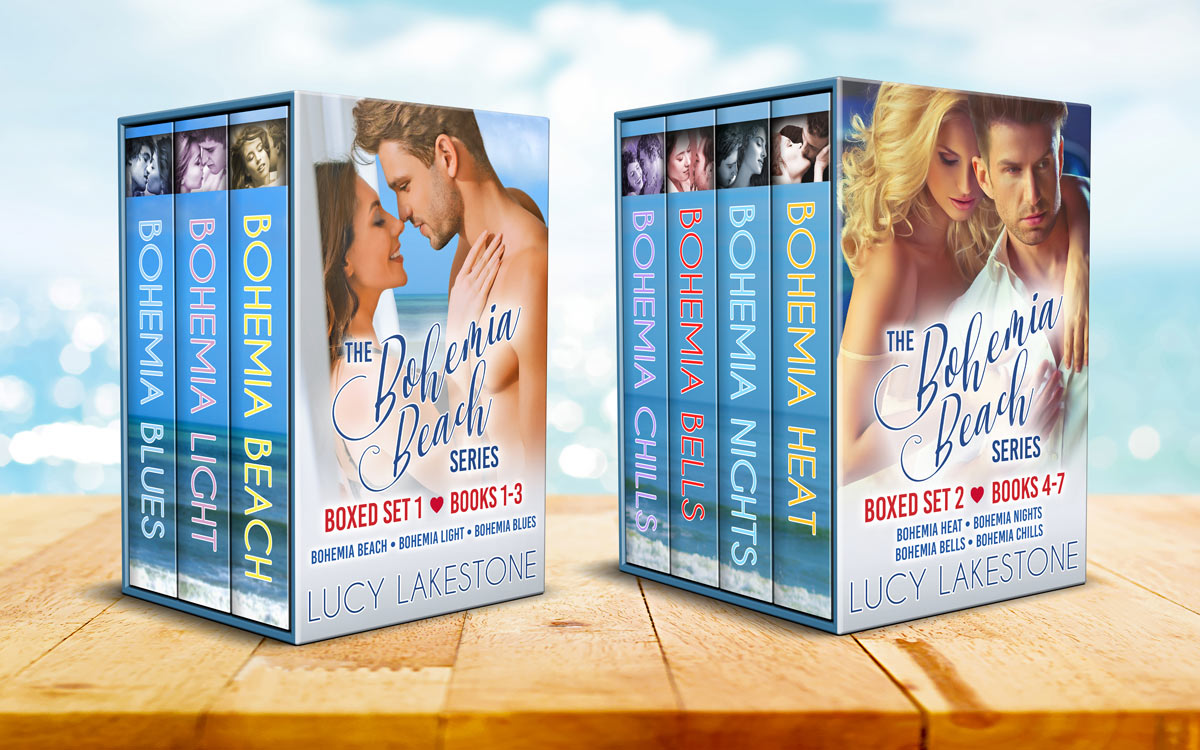 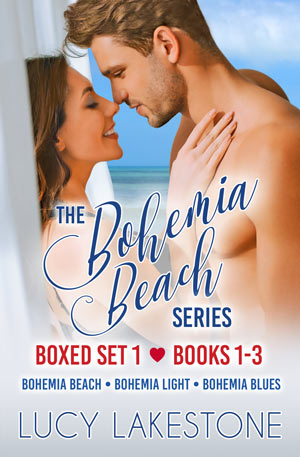 Immerse yourself in a collection of the first three romances in Lucy Lakestone’s sizzling Bohemia Beach Series!

In a beautiful small city on Florida’s east coast, artists meet, create, laugh and love. Where restless hearts are fueled by secrets and imagination, romance is impossible to resist. Welcome to the seductive tropical escape that’s home to drama, humor and lots of heat – Bohemia Beach. These steamy contemporary romances are the perfect escape for anyone who loves a hot love story.

In this boxed set of three novels, you’ll find stories of an artist’s obsession with a mysterious patron, a photographer seduced by a big-wave surfer, and a musician who discovers unexpected fire in an old friend.

Bohemia Beach (Book 1 – Sloane and Alex’s story): Alex is secretive. Rich. Way too hot for his own good. I’m just trying to make it as an artist. Saying “yes” to him is part of the adventure. Until yes becomes something more. He’s insatiable. I’m addicted. Can obsession turn into love? And can passion overcome the past? Or is Alex the worst best thing that ever happened to me?

Bohemia Light (Book 2 – Cali and Wyatt’s story): Wherever I go, I’m there to shoot the photos. Not get entangled with pro surfers looking for a dalliance before they split town. I’m not sure if I should hate him or give him everything. After our reckless tryst, will Wyatt keep wandering the world or stay in Bohemia Beach? He’s inconveniently irresistible. And I can’t seem to keep my heart above water.

Bohemia Blues (Book 3 – Ez and Gary’s story): When my latest boy toy goes ballistic at one of my band’s gigs, who’s there to rescue me? My old high school friend Gary. And there’s no chemistry with Gary. Or at least that’s what I thought until the moment he set my world on fire. There’s no reason a good guy like that should put up with my bad reputation, even if I have a big secret that proves just how undeserved that reputation is. I just want to make music, not fall in love with a dorky artist who always believes the best of me – even when I know I’m the worst. 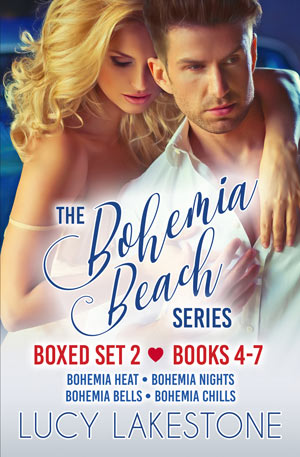 Immerse yourself in a collection of four romances in Lucy Lakestone’s sizzling Bohemia Beach Series, Books 4-7!

In a beautiful small city on Florida’s east coast, artists meet, create, laugh and love. Where restless hearts are fueled by secrets and imagination, romance is impossible to resist. Welcome to the seductive tropical escape that’s home to drama, humor and lots of heat – Bohemia Beach.

Bohemia Heat (Book 4 – Penelope and Jace’s story): So what if Jace Edison is a famous actor? He’s also famous for ignoring women. Jace visits Bohemia Beach to oversee his reboot of Shakespeare, and I have to design the costumes while the production is plagued by disasters. I can’t afford to be burned again. But one scorching encounter in disguise changes everything.

Bohemia Nights (Book 5 – Thea and Duncan’s story): My favorite vlogger is hilarious, he’s got a great Scottish accent, and he’s a total man-whore. And he wants to feature me on his video blog until he drives me crazy. The only way out of it? Agree to spend seven nights with him. This hot Scot has catastrophe written all over him. But seven nights with Duncan might add up to a week I’ll be happy to regret.

Bohemia Bells (Book 6 – Millie and Bennett’s story – a hot holiday romantic comedy): When my friends draft me to plan their Christmas wedding, I figure a spectacular centerpiece by a world-renowned sand sculptor is just what we need. But no matter how talented Bennett is, he’s also a troublemaker. Worse, I can’t resist him, even as his merrymaking steers us toward a wedding-day disaster.

Bohemia Chills (Book 7 – Kayla and Landon’s story – a hot Halloween romantic comedy): I never asked to inherit a historic mansion on the lagoon from the dad I never knew. And I’m too broke to refurbish Bohemia’s most famous haunted house. Its mysteries are alluring, and to my dismay, so is my roommate Landon, who steps up to help me unlock its secrets. But I can’t let him find the key to my trampled heart.