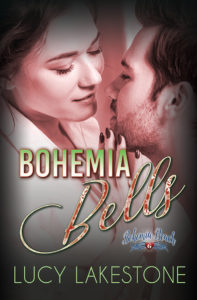 When my friends draft me to plan their Christmas wedding, I’m not worried. I’m a natural organizer, even if I don’t know what to do with my life.

I figure a spectacular centerpiece is just what this wedding needs, and a world-renowned sand sculptor with ties to Bohemia Beach will be just the guy to create it.

But soon I realize my expensive impulse might cost me. No matter how talented Bennett is, he’s also a troublemaker, stirring up spats with the snooty caterer and driving me to distraction.

Worse, I can’t resist him, even as his merrymaking steers us toward a wedding-day disaster. The Christmas Eve deadline is coming up fast, my organized life is completely muddled, we have a critical shortage of mistletoe, and I’m losing my heart in the mayhem.

Bohemia Bells is a hot holiday romantic comedy featuring a heroine seeking a calling that will stick, a sand sculptor with a penchant for pranks, and stockings full of friends and fun. This is the sixth book in the Bohemia Beach Series, each a steamy standalone romance set among a circle of artists in the enchanting Florida city they call home.